Overview: Space Applications Centre (SAC), is a major research and development centre of the Indian Space Research Organisation (ISRO). It plays a key role in realizing vision and mission of ISRO. Located at Ahmedabad, SAC is spread across two campuses having multi-disciplinary activities.

The core competence of the centre lies in development of space borne and air borne instruments/payloads and their applications for national development and societal benefits. These applications are in diverse areas and primarily meet the communication, navigation and remote sensing needs of the country. Besides these, the centre also contributes significantly in scientific and planetary missions of ISRO like Chandrayan-1, Mars Orbiter Mission etc.

The communication transponders developed at this centre for Indian National Satellite (INSAT) and Geo Synchronous Satellite (GSAT) series of satellites are used by government and private sector for VSAT, DTH, internet, broadcasting, telephony etc. These satellites are instrumental in reaching remote parts of the country. The payloads for major navigation systems of the country - Indian Regional Navigation Satellite System (IRNSS) and GPS Aided Geo Augmented Navigation (GAGAN) are being developed by this centre.

This centre designs and develops the optical and microware sensors for the satellites, signal and image processing software, GIS software and many applications for Earth Observation (EO) programme of ISRO. These applications are in diverse areas of Geosciences, Agriculture, Environment and Climate Change, Physical Oceanography, Biological Oceanography, Atmosphere, Cryosphere, Hydrosphere etc.

The Centre also conducts nine-month post graduate diploma courses for students from the Asia Pacific region under the aegis of the Centre for Space Science and Technology Education (CSSTEAP) in satellite meteorology and communication. 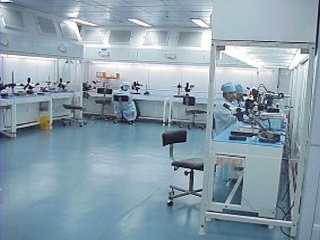 Genesis and History
The genesis of the centre dates back to 1966, with establishment of the Experimental Satellite Communication Earth Station (ESCES), by late Dr. Vikram Sarabhai in Ahmedabad. It was an experimental Earth Station and training centre where scientists and engineers of India and other developing countries could receive training and firsthand experience in the design, development and operations of an earth station for communications and broadcasting.

The present remote sensing programme of ISRO started in early 1970s. Payload development at SAC was started with balloon experiments followed by aerial photography for remote sensing. At the same time activities were also carried in the field of meteorology with available data from foreign satellites and from indigenously developed airborne thermal scanner.

The first phase saw the development of airborne thermal sensors, multispectral scanner, linear Charge Coupled Device (CCD) camera, Side Looking Radar, Colour Infrared (CIR) based photographic systems and a number of photo interpretation and ground truth equipment. Based on above initial work, a strong applications programme was evolved around these instruments. Foundations for space borne sensors were laid during this period. Under the programme ‘Satellite for Earth Observation (SEO)’, two satellites were launched and called Bhaskara satellites after their Launch onboard Russian launch Vehicle. Bhaskara carried a 1 km resolution 2 बैंड TV camera systems and a three channel microwave radiometer. These were designed, developed and successfully qualified in house. Bhaskara I and II were the first Indian Meteorological satellites which carried microwave radiometer called SAMIR to provide information on sea state and atmospheric water vapour content for use in meteorological studies.

The second phase in 1980s witnessed the results of earlier efforts of experimental satellites. The IRS 1A programme was successfully launched and the users started receiving multispectral imagery with 36m resolution. Major applications in agriculture, hydrology, geology and other areas were defined in close interaction with user agencies and the IRS utilization programme was carried out successfully. These efforts led to semi-operational applications of IRS 1A data.

Strong foundation was also laid for airborne SAR system development, its data processing and applications at SAC. The advanced activities carried out at at the centre during the third phase in 1990s put India at par with many other advanced nations through the design of high resolution sensors in the optical and microwave regions including a successfully flown airborne SAR system and a very sophisticated application programme tuned to our country's needs. The 5.8 m resolution Pan Camera of IRC 1C & 1D revolutionized the applications concept in the country. Being the best resolution civilian sensor in the world at that time, it attracted the attention of foreign users.

SAC has state of the art General Circulation Models for experimentation with satellite data. Prediction of weather in the extended range and prediction of Ocean state in the short range are the fields of active research.